I first climbed Rainier last June (2014) and it was everything I thought it would be.  We drove into the park in a heavy mist and as the road climbed higher, the snow lining the road turned from patchy to four-foot tall walls lining the way to Paradise.  When we got to Paradise the stereotype didn’t end– a beautiful old lodge and ranger station covered in snow in this amazing mountain setting.  We set off with our boots and snow gear on, and headed up the “standard” disappointment cleaver route. As we climbed higher, we got above the mist and the upper mountain revealed itself with glistening glaciers pouring from its summit, turning into ice falls and curving with the underlaying topography of rock.

This year it was a different story. Record low snowfall in the Pacific Northwest, and warmer than usual temps this summer, have wreaked havoc on the mountain.

We First tried to climb via the Emmons glacier route, usually a straight forward and seldom traveled route on the mountains north side.  We were warned by the ranger when we got our permit that conditions on the Emmons were pretty bad and most groups were not summitting.  We smiled and said thank you, thinking we were going to be fine since I had brought my technical ice tools and screws in addition to standard glacier gear, so that we could be sure nothing could stop us.  As we moved up the mountain we were blown away by the lack of snow and how far up the glaciers had receded.  On our second day we arrived at camp Schurman, amazed to see crevasses right out of camp.  Looking at the route we could see it was indeed in bad shape.  The upper ice cap had calved off and pushed its way down making what looked like a 40 – 60 foot overhanging wall blocking the way to the upper mountain.

Talking to the rangers, they confirmed that what we saw was correct, and no one had gotten past that obstacle in weeks.  We considered our options– we knew that a small group could most likely make it, but our group of 9 would probably not get past that wall. So after spending the night we turned tail the next morning, and headed for Paradise and the far more traveled Disappointment Cleaver route.

This year the mist driving up to Paradise was there, but the snow walls lining the roads were not.  When we got to the trail head we found it completely dry and full of people.  This is the most popular place in the park, with stunning views and lots of easy day hikes starting from Paradise, it is crawling with tourists and climbers alike. This time I started hiking in shorts and flip flops with my snow pants and boots in my pack.  It was not until about half way to camp Muir that we finally hit snow and needed our gear.  The lower snowfield that leads to camp Muir was a wreck.  With little snow covering the ground, the dirt had blown all over the snow, and the huge fires in the area also did their share of dirtying the snow by depositing ash all over the mountain.  It was like walking through the nasty black slop on the side of the road days after a storm.

Camp Muir was even worse.  What is normally a busy little camp tucked into a saddle on the ridge line was now a ghost town.  The guide services were still running a fair share of clients up the hill, but independent climbers were scarce.  Good news was that there was plenty of room in the climbers hut for our group, and because of that we did not need to carry tents up the mountain.  Bad news was there were 75 mph winds predicted for that night and the next morning, and that was our only chance to summit since we had spent 3 days on the Emmons route.  We didn’t have a choice, so we went to bed early and prepared for a summit push that night.

Most of the group could not sleep because of the wind making the hut creak.  We hauled ourselves out of bed at midnight and started making coffee and oatmeal to fuel the late night adventure.  At first the winds had some pretty strong gusts but were manageable.  The hardest part for me was dealing with all the dust blowing around and getting in my eyes.  The higher we climbed the worse the wind got.  If a gust caught you mid step it could blow you about 2 feet off the trail, which in some places means falling into a crevasse.  It was a strange situation.  At first look it seemed really dangerous to be out in those winds, but when you took a step back to really looked at things, it was fine.  The winds were strong, but not strong enough to pick you up and blow you completely off the mountain.  Really it was a cool experience to see the power of the wind– once we thought of it like that, the wind became amusing instead of scary. 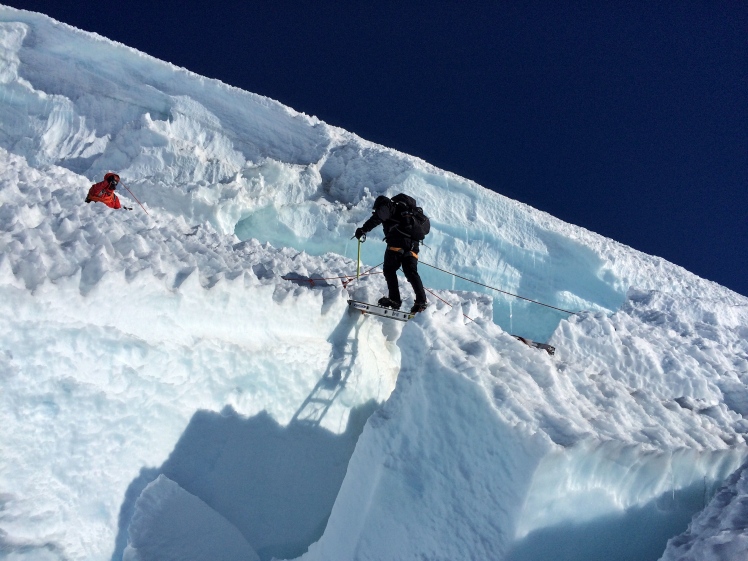 With the wind off our mind we could concentrate on the route, which deserved our full attention.  It was totally different than last year.  The glacier had melted down so much that crevasses were everywhere and the route pretty much climbed straight through an ice fall.  There were multiple places where the crevasses were too wide to be stepped over and the guide services had placed aluminum ladders (like you see in pictures from mount Everest) to span the chasms.  There was nothing “standard” about this route this year.  We dealt with the wind and the ladders and slowly made our way to the top, as rope team after rope team of guided groups turned around because of one reason or another.

However, once we crested the crater rim things got real…

That was the strongest wind I have ever experienced in my life.  It was down right debilitating.  Short of crawling, there was no way to move in it.  On the crater rim, a few hundred feet below the actual highest point of the mountain, we called it good and headed down to get out of the full blast of the wind.

I always come away from mountains with a new respect and some lessons learned.  This experience taught me that things are not always as scary as they seem, and if you take a moment to step back and look at your situation instead of just reacting, the outcome is usually better.  Taking that scary step into the unknown is hard but so rewarding.  Without a little risk, climbing and life would just be boring.

One thought on “Rainier on the Rocks”