There’s a lot that goes into building a new roof on top of your cargo van, so we’ve broken down the build into a couple phases. This blog post will be about how we got started.

After researching the different year/makes/models of cargo vans, we found that Chevy had the best reviews. We found a good deal on a 2007 Chevy Express with all-wheel drive– the perfect feature for our winter adventuring. Extending the roof was the first thing to tackle after our purchase, and we soon realized that buying a fiberglass topper would not only be a pricey investment, but it would lack in character compared to the VW Transporter we came from. I have a bit of construction experience, so banking on that and knowing our van’s payload limit was 2,300 pounds, we decided to build a roof extension in a similar manner to the walls of house and attach it to the frame of the van. In all honesty, we didn’t know how it would turnout beforehand– there were no drawings or technical details other than a rough game-plan in our heads. In the end it worked out– hopefully you learn something from our experience:

Step One: Cutting Out the Roof

This was the most unnerving step– once you start cutting, there’s no going back! We had debated if it would be better to build the new frame before cutting out the roof so that we could expedite the amount of time our vehicle would be without a roof, but because we didn’t know the exact measurements of the frame until the metal roof was removed, we opted to make the cut and get a better idea of what we would be working with. Luckily the weather gods blessed us with a week of sunshine.

My weapon of choice for the roof extraction was an angle grinder– maybe there’s a better tool out there, but it’s what I had access to and it worked just fine. Playing it safe, I cut about four inches from the frame around the back and sides of the van, and ended the cut behind the front cab. After removing this big chunk of metal, I was able to stand inside the van and get a more precise cut to expose the frame of the van where our base 2×4 boards would sit.

We figured if 2×4’s are good enough for a house they are good enough for a van.  We put the studs on 16″ centers with a 5 degree lean to make the walls of the extension match the curve of the van.  I wanted to beef up the extension wherever possible, so all the corners have double stacked studs and the openings at the front and back are double plated top and bottom.  We used 2×4’s for ceiling joists on 10″ centers and hung them with joist hangers from the doubled top plate at the front and back.  The whole frame was screwed together instead of nailed.  It was more expensive and slower than nails but with the amount of vibration this frame will see, I did not want nails working their way loose.

We also framed an opening for a skylight with an exhaust fan.  This will help bring light into our window-less van, and vent out steam when we cook. 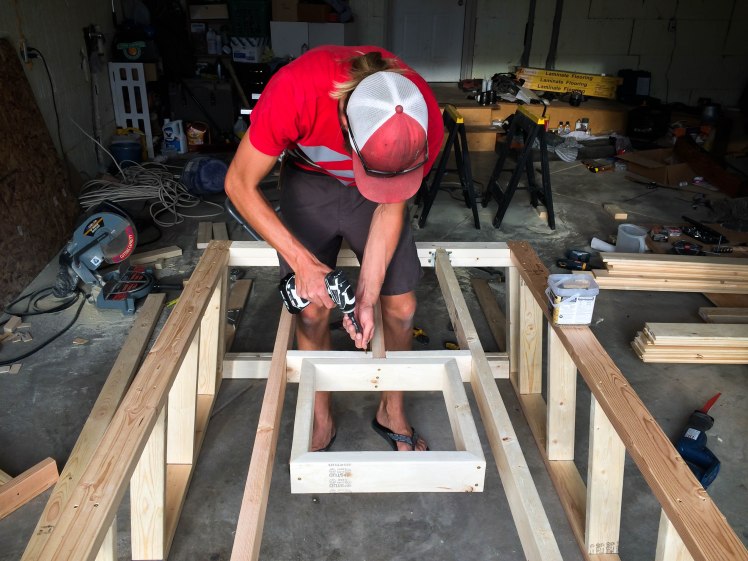 With the frame on the van, it was time to center it up and clamp it down.  I have found that with stuff like this, eyeballing first and then measuring to see if its close, works better than just measuring.  Trust your eyes, there is no guarantee that the walls are perfect, and it won’t matter if your tape says its off a 1/16th of an inch.

Once it was centered up and clamped down I drilled holes through the bottom plate and into the frame of the van to secure it.  I bolted it in 3 places at the back and in between each stud along both sides– amounting to about 30 3/8th’s bolts. I worked my way form the back to the front bolting both sides at the same time.  This made the frame I built flex and match the curve of the van which gave us a nice tight fit and a cool look.

After that came time to cut and secure the joists that go from the top of the frame forward angling down to meed the roof above the windshield.  This was a pain! I made the middle two joists even, and the two side joists even. This made for one flat section at the front of the van, while the two side sections angled in. The hope in doing this was to make the vehicle more aerodynamic as well as give the new top an aesthetic flow. There was not room to use a bolt and nut to secure these joists, so I drilled a pilot hole and secured them with 3/8th’s lag bolts that went through the roofs skin and into the frame below.

After that was all done I made sure to fill any gaps between the bottom plate and the frame of the van with silicone so to have a good, solid, water tight fit.

Please ask if you have more detailed questions and stay tuned for how we finished the roof!

36 thoughts on “Building the Extended Roof for The Van: Phase One”