I grew up skiing in Utah, my dad is an excellent and avid skier who taught me to ski at the age of two. I grew up with long, straight, skinny skis. As I got older and more into skiing, technologies were evolving but my dad and I stayed in the past, true to the “traditional style” of skis that had worked so well for decades. Then my cousin gave me a pair of fat powder skis and I scoffed at their ridiculous dimensions. That is until the moment I turned them off the groomer and into deep untouched powder snow.

I was an instant convert and all I wanted from that day on was bigger, fatter, less camber, reversed side cut etc. I was open to trying all kinds of new skis after experiencing how good the new shapes were for my self. Shane McConkey, a professional skier, was an idol of mine growing up. He can probably take more credit for the modern powder ski than anyone else. In 1996 he came up with a crazy idea for a ski that took 6 years to convince a manufacturer to make. When they finally did, it changed the skiing world for ever. Sold with every copy of the ski was an essay written by Shane entitled “Mental Floss,” and included instructions on how to ski this revolutionary new ski with guidelines for “flossing out” our old ways of thinking about skis.

This post is directed at changing the way we think about our food and our environment, not skiing. I tell that story about my conversion to modern skis because it has been the best example in my life where I thought I wouldn’t like something new, then I tried it and instantly realized I was wrong.

Four years ago I became a vegetarian, much to the surprise of people who knew me when I was young as the kid running around scout camp without a shirt on and a rare steak in each hand. For Christmas in 2011 a friend of mine gave me a guidebook to barefoot running and the common theme throughout the book was “listen to your body”. This concept was to be applied to training as well as diet. I tried it out, going to the grocery store and wandering around trying to buy the food my body wanted. I came home with spinach, broccoli, carrots, bananas, almonds, and I think for the first time in my life I had bought kale.

For the next several months I tried to listen to what my body wanted to eat. I had landed a job as a wildland firefighter and was training hard doing long runs and hiking with a backpack full of rocks to simulate the rigors of the summer job that lay ahead. When my crew boss asked if anyone had any dietary restrictions, I instantly decided that I would try to be a vegetarian for the 6 months I was contracted to fight fire.

I got my hands on another book about running halfway through the fire season called “Eat and Run”. It is the story of an American ultra marathon runner. How he started running and transitioned from the standard American diet to Vegetarian and then to Vegan. At the end of each chapter he includes one of his favorite recipes and throughout the book he references other books he read that helped him on his dietary journey. One of them seemed interesting “Mad Cowboy: Plain truth from the cattle rancher who won’t eat meat”.

Up to this point I was digging then vegetarian thing, but was still planning on a big BBQ party at the end of the fire season when I reached my 6 month meat-less goal. Mad Cowboy came in the mail and I started reading it on a fire in Idaho. My world got rocked. Even after a long day of fighting fire I found myself unable to put this book down and read into the night. Willing to trade hours of my precious sleep to learn about how horrible the meat industry is and what it has been doing to our health and the health of our planet.

I love Utah and the west and being out in the desert. As a kid exploring the desert I was always troubled by the cows I saw. Why would an animal that eats grass live in the desert where there is hardly any grass? I had no idea that not only are cows the worst thing you could put in the desert but that they are not even native to this continent! In Mad Cowboy, Howard Lyman refers to cows by saying, “The bovine is a truly formidable and resourceful killer in the disguise of an innocent, melancholy, big-eyed grass eater.”

Livestock grazing is the number one cause of desertification in the world. Everywhere they roam they leave behind them a land stripped of its native grasses, dried up streams, trampled vegetation, and generally unfit for the native plants and animals that lived in harmony with the land for so many years before the cows came.

It takes about a gallon of gasoline in the production of one pound of grain fed beef in the USA and as much water as the average household uses in a year to get 10 pounds of steak.

To say that cows are an inefficient form of food is a monumental understatement. It takes roughly 16 pounds of grain to yield one pound of beef. By feeding this grain to cattle we forfeit 90% of the original protein, 99% of the Carbohydrates and 100% of the fiber. It takes about a gallon of gasoline in the production of one pound of grain fed beef in the USA and as much water as the average household uses in a year to get 10 pounds of steak. An acre of fertile land is capable of producing 40,000 pounds of potatoes, 30,000 pounds of carrots, 50,000 pounds of tomatoes or 250 pounds of beef. Despite its inefficiency, America’s need for beef causes us to import beef from countries like Brazil most of the imported beef ends up in fast food burgers. Its been estimated that for every burger that comes from Brazil, 55 square feet of rain forest was cleared to create grazing land. That same burger costs us no less than 600 gallons of water to produce.

These environmental reasons, along with the fact that I felt great, were what cemented in me the desire to never eat meat again.Its been really fun to figure out how to live my outdoor life style while maintaining these standards. I was at a mountain film festival recently and was offered some roasted and seasoned crickets to snack on while waiting in line. My immediate reaction was “no thank you, I am a vegetarian.” At that point I had heard that people had started eating crickets but was unsure why. The man offering the crickets moved on down the line and I didn’t think of it again.

A couple weeks later I got an email from a company that makes protein bars out of cricket flour asking if I would be interested in representing them as an ambassador. My first reaction was EWW! I weighed out wether crickets fit into a vegetarian diet or not. I mean insects aren’t animals right? But they aren’t vegetables either. Unsure of how to categorize them and still grossed out at the thought of eating bugs I ignored the email for a few days.

In the mean time I happened to pick up a climbing magazine and stumbled upon an article about a girl who did a solo big wall climb on El Captain in Yosemite eating nothing but insect based foods. Reading the article I learned that crickets are an amazing source of protein many many time more efficient than beef. This article spoke to the environmental reasons to eat crickets and tipped the scales in my mind to being open to trying them. I responded to the email, making sure to add that I was skeptical but willing to try.

The bars came in the mail a few days later. The moment of truth, could we eat bugs? Sarah and I picked the flavor that seemed best to start with, Dark chocolate, coffee, cayenne, and took a bite. . . . There were no legs, no antenna, no crunch of exoskeleton and squish of guts. Just a really good energy bar. The more we learned about the bars the more we liked them.

The company is called Chapul. They are based in Salt Lake City, Utah, and they are psyched on crickets as a more efficient source of food for humans. Crickets do not devastate the land and need only a fraction of the food and water that cows require to grow. As far as the nutrients are concerned, they blow animals out of the water. Gram for gram they contain twice as much protein as beef and are a higher quality protein containing all the essential amino acid strands that our body needs to fully put it to use. They contain 15% more iron than spinach, and have more vitamin B-12 than salmon (thats a hard one for vegetarians to get naturally).

The reasons to eat crickets far out weigh the reason to not eat crickets. Its that preconceived notion that bugs aren’t food we need to floss out of our mind. That silly initial reaction that we all feel when faced with the idea of eating a bug. We get squirmy and disgusted and say no without any logical thought. Just like the idea of a fat ski was hard for me to grasp at first, but after trying them out I instantly understood what they were trying to accomplish and I was on board. 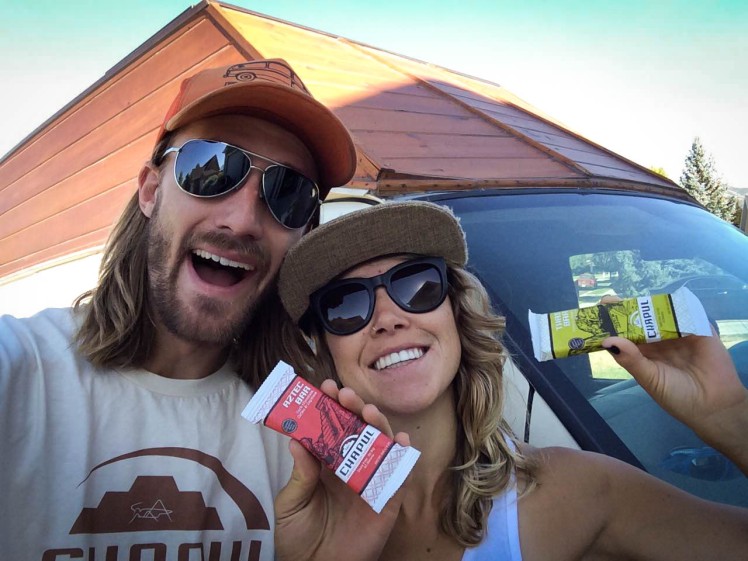 Try new things. Try new things every day. New foods, new activities, new places, new friends. Try not eating meat for a week and eating more veggies and see how you feel. Try to have an open mind to anything thats new, to learn about it and test it out before judging it and ruling it out as “not for you”. See how quickly your biases get shattered when you try things you have been too scared to try before. Try a cricket bar, I think you will be pleasantly surprised, and you will be helping to grow the demand for more sustainable and efficient forms of food. If you open your self up to accepting new opportunities you will be amazed at the opportunities that will find you.

Sandler, Michael and Lee, Jessica, Barefoot Running: How to run light and free by getting in touch with the earth (Run Bare Publishing, Boulder, Co, 2010)

livestock is the number one cause of desertification: Agence France-Presse, September 3, 1997.

One gallon of gasoline to produce one pound of beef, Ibid, p. 225.

3 thoughts on “Mental Floss: a Story of How I Became a Vegetarian That Eats Bugs”