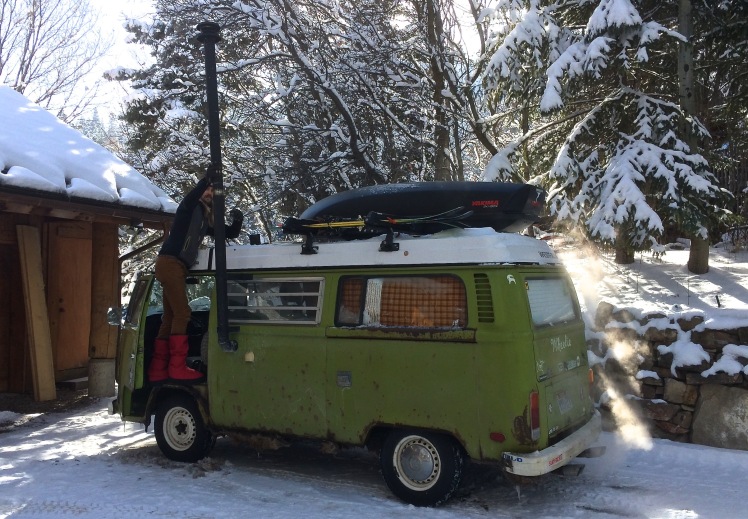 Wonderful cold winter has made it to Utah! I say that with sincere enthusiasm while cozied up next to our little wood burning stove after my first ski tour. Our wet clothes are hung up to dry and I’m stripped down to my base layers. It’s only 8 degrees outside, but we’re toasty warm inside the little bus. After 6 weeks of tinkering with the stove and trying different methods of insulation, we’ve figured out a system. We are  going to survive winter in Utah– more than that, we will be warm.

The stove we decided to buy is called the Kimberly Stove made by Unforgettable Fire. After researching different heaters such as propane and electric, we decided that it was worth the investment– the stove cost nearly twice as much as the bus itself. We liked the idea of this stove because it has a secondary combustion chamber and is thus very efficient, while letting out very little emissions. The other nice thing about the Kimberly Stove is that it small (25.5 inches tall, 10 inches in diameter) and can be mounted within six inches of flammable material. Most of the heat comes off the top and the front of the stove with very little being emitted from the sides and back. Having such a small space to work with, we ended up stripping down and rebuilding our existing cabinets in order house the new stove.

Another issue we had to deal with was installing a chimney. Because our bus has a Westfalia pop-top we couldn’t extend the chimney out the roof of the bus– instead the pipe protrudes out the side at a 90 degree angle. She now looks like a baddass-mobile, or a hillbilly contraption, depending on who you ask. What we didn’t realize at first was that the elbow in the chimney, and the fact that the vertical section after it was only five feet long were going to create problems with the stove. For the first few weeks after we moved into the bus we couldn’t get the stove to heat the tiny space and we got smoked out on numerous occasions. We were to the point of wanting to return the stove and try to figure out something else.

We called Roger, the inventor of the stove, who had already been helpful when deciding to purchase the stove. He basically told us that we needed a longer chimney or the stove wouldn’t be able to function properly. This solution presented a problem as we couldn’t very well drive around with ten feet of pipe sticking out the side of the bus– it’s not a big vehicle to begin with. Our current solution is  to strap five feet of extension pipe to the roof of the bus and only mount it to the chimney when its parked. Luckily Matt is 6’7″ and assembles it with ease. We can now get a ripping fire going in very little time– while red flagging every cop making their rounds to investigate what the hell is going on inside. At least we will be warm, dry, and cozy this winter.

One thought on “The Kimberly Stove”